Pork rillettes, or rillettes de porc, are a popular lunch or snack in France. Think of fresh crusty bread, creamy French butter, topped with tender pork and served with cornichons.

This recipe is so easy to do, makes a great gift and is so deliciously frugal too.

A French lunch is not just bread and cheese!

Rillettes are basically a dish of slow cooked pork or poultry in its own fat to make a tasty, unctuous spread. It's cooked in a very similar way to making duck confit, but the meat is served shredded instead.

My French friends give these as gifts. They often have them at a casual evening meal, if they have eaten their main meal at midday, as is the norm in France. Perhaps, it's a bit like pulled pork in a jar, but much more classy and easier to make than a pâté!

You can make this spread from any meat, but duck and pork seem to be the most popular. Pork seems to be the cheapest meat here in France so for this recipe I buy chunks of belly pork. You need the fat in the meat for the cooking process, but the finished product is not greasy. You can also use pork shoulder if you prefer.

The rest of the ingredients are lard, (rendered pork fat), garlic, fresh thyme and seasoning.

How to make pork rillettes

Start by placing slices of belly pork, (or shoulder), in a large lidded saucepan with lard, crushed garlic, chopped fresh sage and seasoning.

Heat slowly until the lard has dissolved and then cover and cook on a low heat for 3 hours, stirring occasionally. Remove the lid and cook for a further hour or until the pork is very soft.

Drain the meat in a colander over a large bowl, reserving the liquid. Remove the sage and any lumps of fat leftover in the pan.

Use two forks to shred the meat.

Put the rillettes back into a clean saucepan with the reserved juices from straining and heat for a few minutes until everything is mixed.

Pack the rillettes into sterilized jars and leave to cool and then pour over a layer of melted lard to seal before securing the lid.

What is the difference between pork rillettes, terrines, pâtés and parfaits?


Rillettes is the term used for slow roasted meat, cooked in fat, which is then shredded and packed in its own juices to preserve it.

A terrine is often made by lining the dish with bacon, layering meats and sometimes vegetables, then cooked in a water bath in the oven. It is served in slices, normally for a starter.

A pâté is often cooked in the same way but the meats are minced before cooking so that the pâté can be spread on bread. Pâté can be course or smooth.

With a parfait the meat is cooked first and then passed through a sieve to achieve a smooth mixture. Cream and butter are often added for added richness, along with brandy or other alcohol. I should point out that the term parfait, when discussing a savoury dish, is more used by the British than French. A parfait in French, relates to a smooth dessert.

How do you store this recipe?

This is an old fashioned method of preserving meat, so technically, the rillettes will keep for 6 weeks in the fridge in sterilised containers. I prefer to freeze in a plastic container for up to a month or keep in the fridge for a week.

What do you serve with this?

Toast or plenty of crusty bread is best for this spread. I like to serve it with apple chutney and with cucumber or cornichons.

What's your favourite thing to spread on crusty bread? This is definitely mine. 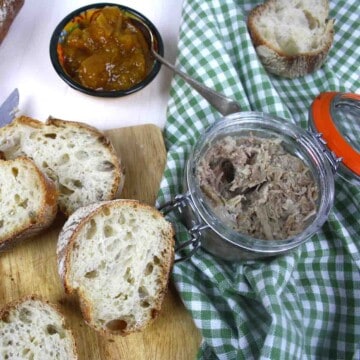 Keyword pork, rillettes
Tried this recipe?Let us know how it was!