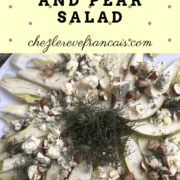 This fennel and pear salad takes just minutes to make and it's so easy too, which makes it perfect for entertaining.

There's plenty of crunch from the vegetables, along with hazelnuts so it's really light and refreshing.

With a simple dressing and the tang of crumbled blue cheese, this salad is perfect for a starter, lunch or side dish too.

Do you get into a rut with salads? Too often, I end up just throwing the same boring ingredients into a bowl as it's just too easy to find something new.

This salad is actually quicker to make, as there are less ingredients and less chopping. Better still, if you are entertaining, you can make this at the last minute to free up space in your refigerator. It takes less than 10 minutes!

Normally I love fennel roasted in the oven but eaten raw it is crisp and the taste is reminiscent of celery and aniseed, but without all of the stringiness that celery often has

There are only a handful of ingredients in this recipe.

I've used a whole bulb of fennel, which is really crunchy and refreshing. Try and buy one with the fronds still on, as they add extra flavour to the dish and make an attractive garnish too.

Conference pears, but really any pear will work. Try and use a pear that is just ripe, as overripe pears tend to be mushy. They will add a great natural sweetness.

I've used whole hazelnuts for additional crunch but you could easily swap these for walnuts, pecans or your other favourite nuts.

And, for more tang, I am using Stilton cheese. This British cheese is known as the King of Cheeses and is only allowed to be made by certain producers in the UK as it has a 'Protected designation of Origin'. It is an unpressed semi-hard blue veined cheese which a creamy taste, if you haven't tried it. Of course, any blue cheese works, or you could use some crumbled feta cheese instead.

Start by preparing the fennel. Chop off the feathery fronds and give them a rough chop. Now trim the root and discard.

Cut the fennel in half from root to tip. Place it flat side down on a chopping board, then slice finely.

Slice the pear in half and remove the core, then place flat side down and slice thinly.

Roughly chop the hazelnuts, so that you have a mixture of small and large pieces.

Use your fingers to crumble the Stilton or blue cheese.

Make the dressing by placing all of the ingredients into a container with a screwtop lid and give it as good shake.

Take a flat plate and lay out the fennel slices in a fan shape.

Now add the pear slices on top. Sprinkle on the the nuts and cheese then pour over the dressing.

Lastly, garnish with the fennel fronds before tucking in!

Can I make this salad in advance?


This salad is perfect for making in advance if you need to, as the ingredients don't become soggy. It would be best to sprinkle the pear witha tablespoon of lemon juice to reduce any discolouration and I would just add the dressing at the last minute.

What is the best olive oil to use for fennel and pear salad?


For cooking there is no need to use anything other than plain olive oil, but for salad dressings I prefer to use extra virgin olive oil.

Extra virgin olive oil is known as EVOO and is formed from the first press of a batch of olives. In this way it retains the most flavour, aroma and nutritional value possible.

What other ingredients would work in this salad?

I also like this salad with sliced red or green apple or even slices of orange or pink grapefruit.

Lots of nuts work well too, particularly walnuts and pecans.

If you don't like blue cheeses try shaved Parmesan or pecorino. Crumbled feta or Lancashire cheese would also work well. 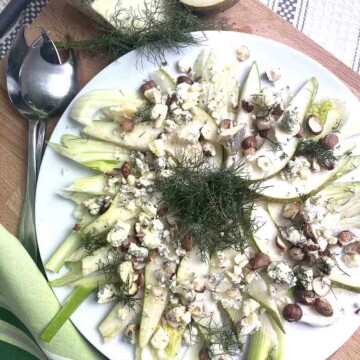 Keyword fennel, pear, Stilton
Tried this recipe?Let us know how it was!