This Lincolnshire plum bread is a proper tea loaf, packed full of juicy fruit and delicious with a cup of tea.

But, up in the north of the country, they also serve it with a slice of cheese because it's absolutely delicious!

The sweet plum loaf compliments the sourness of the cheese and is the perfect accompaniment.

Easy to make, from store cupboard ingredients, so go and get baking!

Why you will love this

I was born and bred in the far south of England in Hampshire, before I moved to France. Now I now live in a small Lincolnshire village in the east Midlands. It couldn't be more different!

The great thing is that I'm now living in the heart of farmland, surrounded by abundant game and fields of vegetables in amazing soil. It's no wonder then, that Lincolnshire has some famous regional dishes.

This is actually a loaf that is historically eaten at Christmas time, but now it's eaten all year round and most butcher shops and farm shops sell ready made plum bread all around Lincolnshire.

It's perfect as a snack spread with butter or as lunch or tea, served with a slice of cheese.

Best of all, it's made with storecupboard ingredients and a great way to use up all your leftover dried fruit!

How to make the tea bread

Put the dried fruit into a bowl and pour over the hot tea. This will help the fruits to rehydrate and become plumped up and juicy in the plum bread.

Stir the fruits and leave to soak while you prepare the rest of the ingredients.

Measure the milk into a jug, then and add the sugar eggs and butter and whisk well.

Sprinkle on the yeast and stir in.

Fix a dough hook to a stand mixer and add the flour to the bowl with the spices. Mix to combine.

You don't need a food mixer to make plum bread so just use a big bowl and wooden spoon instead.

Pour in the wet mixture and mix until the dough comes together.

Strain the fruit and add to the mixing bowl. Briefly mix to combine the fruit.

Remove the dough from the bowl and knead by hand for about five minutes until the dough is smooth and the fruit is evenly distributed.

Add a little oil to the mixing bowl to make sure that the dough doesn't stick.

Put the dough into the bowl, covered with a clean a tea towel and leave in a warm place for an hour.

Briefly punch the dough in the bowl to knock out the air.

Place the dough into a 1 ½ litre loaf tin and leave to prove for a further hour.

Cool in the tin before slicing.

Why is this loaf called plum bread?


Traditionally dried plums or prunes were often used in cooking, but the word plum is an old fashioned term which actually means raisins.

Christmas pudding, also known as plum pudding, is another example.

Why do you knock the air out of a loaf?

Many bread recipes require you to knock the air out of the dough after the first rise.

This is because large pockets of air accumulate in the dough and this would lead to an uneven texture with large holes in the bread.

The easiest way is to leave the dough in the bowl and use one hand to bring the outside of the dough to the middle a few times.

This will help the dough to have more a uniform texture.

What other ingredients can I use?


You can swap the dried fruit around and use more raisins and less currants, for example, just leave the overall measurement for dried fruit the same.

As it's traditionally a Christmas bread try adding dried cranberries for a change or chopped prunes, figs or dates.

Cakes and breads to try 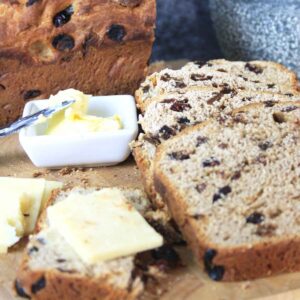 Disclaimer: The nutritional information provided is approximate and is calculated using online tools. Information can vary depending on various factors, but we have endeavoured to be as accurate as possible.
Keyword Lincolnshire, plum bread
Tried this recipe?Let us know how it was!
« Valentine's Day Menu - French Inspired
Basic White Sauce Béchamel »