Bourbon glazed ham is a fantastic centre piece for any occasion.

Hot or cold, there is so much flavour, from the moist and tender meat to the crunchy glazed coating.

Easy to make in advance, reheat, freeze and so may ideas for any leftovers too.

There are plenty of tips as well, to make sure your ham is cooked to perfection and there'll be no complaints that it's too salty either!

Why you will love this glazed gammon

I know that many people prefer to buy a ready cooked ham at Christmas or for a buffet, as it seems to be so much easier, but this way of cooking the ham is easy and fool proof. This is the way my dad always prepared a ham. I don't know the origin of it, but it's a method that I've always used too. Simmering the gammon and then roasting it ensures that you always have juicy meat and a gorgeous, crusty glaze.

Start with your piece of gammon. You can use a piece with a bone in or out, the method will be the same. I like to look for a piece that is not rolled or needing to be held together by string, as it will cause havoc with the sticky glaze! I also like to make sure that thegammon has a nice layer of fat.

For the glaze I've used bourbon, but you could use whiskey of course. The other ingredients are ginger marmalade, brown sugar and a tin of pineapple in juice.

How to make sure that the ham is not salty

Start by weighing your gammon and calculate the total cooking time of the gammon. The basic formula is to allow 30 minutes of cooking time for every 500g of gammon. So, for a 4kg joint the total is 4 hours.

In the past a gammon joint, whether smoked or unsmoked, could be very salty. Nowadays, it's much less common but I normally add an extra few steps to the cooking process to be sure.

If you have plenty of time you can leave the gammon in a large container with enough water to cover. Slice of a slither of meat and fry in a pan to check if the meat is salty or not. Soak for longer if you need to.

An alternative is to put the gammon in a large pan and cover with cold water. Slowly bring to the boil then simmer for 5 minutes. Discard the water and cut a slither to taste. Repeat the process is required.

How to make bourbon glazed ham

When you are happy that the ham is not salty place it in a large pan and cover with water. Bring to the boil and simmer for half the cooking time.

In the meantime put the bourbon, pineapple, sugar, ginger marmalade and water into a saucepan and heat. Stir until the sugar dissolves and the mixture comes to the boil and thickens. Leave to simmer for about 5 minutes, until the pineapple breaks down.

When the gammon has had the half cooking time drain and leave to cool for a few minutes. Remove the skin with a sharp knife and try and leave an even layer of fat.

Score the fat in a diamond pattern. Transfer to an oven dish, lined with foil and pour over the glaze, using a pastry brush to coat evenly.

Roast 180C/350F for the remaining time and increase the temperature to 200C/400F for the last 20 minutes to get a dark, caramelised crust.

Remove from the oven and cool before slicing.

What other glazes can I use?

Honey roast ham is really easy to do. Score the fat and press a clove into each intersection point. Glaze with honey and roast as normal.

Leftover ham will last for 4-5 days in the fridge. If you need to keep it longer then freeze it.

What can you use the leftover ham for?

The possibilities are endless! I always have some leftover ham and I cut some into small dice and freeze for use in soups, scalloped potato dishes, such as tartiflette, and pasta sauce. I freeze larger cubes for my chicken, leek and ham pie or for pizzas. Of course, sliced ham is perfect for sandwiches, toasted cheese sandwiches and salads.

What is the difference between bacon, gammon and ham?


Bacon is raw cured pork cut from the belly or back of the pig.
Gammon refers to cured pork that has not been cooked and ham refers to the gammon when it has been cooked. 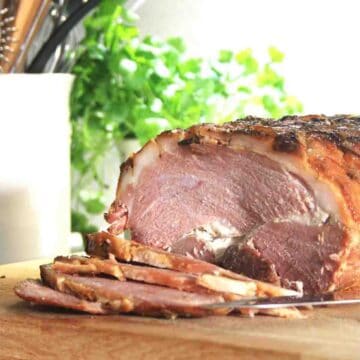 Top tips Disclaimer: The nutritional information provided is approximate and is calculated using online tools. Information can vary depending on various factors, but we have endeavoured to be as accurate as possible.

Keyword bourbon, gammon, ginger, ham
Tried this recipe?Let us know how it was!