Bacon wrapped stuffed pork tenderloin or pork fillet is perfect for a special meal at home at any time.

Elegant enough for entertaining and simple enough to prepare for a family dinner, you will be making this again and again.

Using this low fat and economical cut, it's great for families but best of all it's cooked in under 30 minutes?

Why you will love this dish

This is one of those dishes that looks like you put so much effort in, but really, it's just a question of assembly before throwing it in the oven.

It's great for entertaining as it's easy to prepare in advance. It only takes about 25 minutes to cook too.

In France this cut is a filet mignon, a choice cut. However, there is very little fat so roasting the fillet on its own would make it dry and tough so I prefer to stuff the fillet.

I like to use some sausage meat as a base for the stuffing and for a guide, four good chipolatas are enough.

I've also used half a chopped apple and a few porcini mushrooms, soaked and chopped. Fresh sage is always great with pork but a sprinkling of dry sage is good. Oregano or savoury also works well.

It's so easy to do as there is no cooking involved in the preparation.

Trim the fillet of any white gristle and then cut a long slit in the underside and open out the fillet.

Mix together the sausagemeat, chopped apple, chopped porcini and sage stuffing ingredients together and wedge into the gap in the fillet.

Lay overlapping slices of prosciutto, parma ham or bacon on a board, the same length as the fillet. If you are using bacon then it's easier to stretch the bacon with the back of a knife.

Place the fillet stuffing down on the prosciutto and then wrap over the loose ends. Turn over and place on a roasting tray.

Drizzle with olive oil and pepper then roast at 190C/375F for 20-25 minutes. Remove from the oven and cover loosely with foil for about 10 minutes before carving.

Don't forget to use the juices to make the gravy!

What other ingredients can be used in the stuffing?

There are loads of stuffing variations to try such as:
dried apricots, chopped walnuts/chestnuts or chopped shallots or mushrooms, (lightly fried first). Or just try using different sausages as a base, like pork and leek, Toulouse or caramelised onion.

How do you store this dish?

This dish is great for preparing in advance and leaving in the fridge until you are ready to cook. It will benefit from sitting at room temperature for 30 minutes to help with the cooking.

Any leftovers can be eaten cold or frozen, well wrapped for up to 3 months. 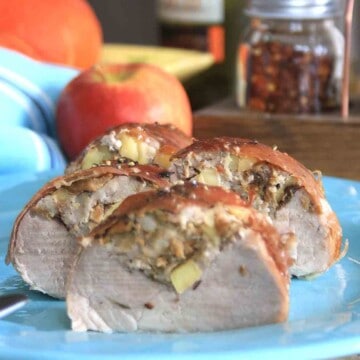 Disclaimer: The nutritional information provided is approximate and is calculated using online tools. Information can vary depending on various factors, but we have endeavoured to be as accurate as possible

Tried this recipe?Let us know how it was!