Twice Baked Stuffed Potatoes.  Click here to Jump to Recipe.There's something extremely comforting about a baked potato, although they were always referred to as potatoes in their jackets, when I was growing up. I remember this dish as an eighties thing as that was the time I started collecting recipe cards and stuffed potatoes was one of those free cards to lure you into buying a recipe collection at horrendous cost. If you are a regular reader you will know that I cut corners with time when I can, so with this recipe you can be eating crisp potatoes with a fabulous filling in under an hour.

So I'll start with the lazy part. Put the oven to preheat to 200 C, prick the potatoes and then.......cook them in the microwave! You need to use full power and I always go with 7 minutes then turnover for another 7 minutes. Timings will vary. Brush the potatoes with oil and put them directly onto an oven rack and bake for 10-20 minutes until golden brown.

In the meantime prepare the filling by frying the bacon and onion together, then add some garlic. Grate some cheese and chop chives. Combine together with creme fraiche and the flesh of the potatoes. I use a tomato knife to slice the potatoes and a grapefruit spoon to scrape.

Fill the halves with the mixture.

Top with extra cheese and chives.

Bake for another 15 minutes until golden.

This dish is great on its own  for lunch or as a side dish. Make it veggie by swapping the bacon for cooked broccoli, corn or chopped peppers. Use spring onions rather than the onions too - they just don't exist in my part of France!

What would you put in your stuffed potatoes?

If you like this recipe don't forget to Pin it for later! 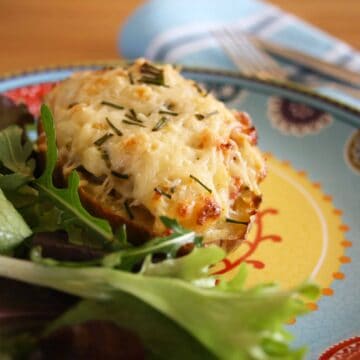