Stuffed Burgers? I don't think that you can beat homemade burgers, as you can control exactly what goes into them. In fact, I though that I would cram a little more into mine and stuff them too. Rather than add a slice of cheese to the top, I've tucked the cheese inside. This helps to keep the burger moist and adds amazing flavour.

What are the ingredients for the stuffed burgers?

I've used 500g of minced/ground beef which is 10% fat. Normally, I would use a mince with a higher fat content for burgers to keep them succulent but the fat in the cheese helps to do this.

For the stuffing I've used 70g of Stilton cheese and 100g of chopped black pudding to mix with the minced beef.

To flavour the burgers you will need 2 cloves of minced garlic and a small onion, finely chopped.

What is Black Pudding?

Black pudding is a blood sausage that originated in the British Isles and is usually made from pigs blood, fat and oatmeal and was traditionally a way to use up every part of a slaughtered pig.

It is sold normally in precooked rounds or as a large sausage to add to dishes. Traditionally it was served as part of a full English breakfast.

In France they have a 'boudin noir', also a blood sausage. The texure is much softer than black pudding and less adaptable.

I like to use black pudding chopped and added to stuffings for chicken or pork, as a casing for Scotch eggs or fried for a decadent breakfast.

How to make the burgers

Chop the black pudding and the onion into 1 cm dice and finely mince the garlic.

Tip all of the ingredients, except the Stilton, into a food processor and pulse until it is mixed well.

If you don't have a food processor place the ingredients in a large bowl and use a fork to mix.

Divide the mixture into 4 balls and cut the cheese into 4 portions.

Tuck a piece of cheese into the middle of each ball and press into a burger shape.

Use a little flour on your hands if it starts to stick.

For best results, chill the burgers for 20 minutes before grilling.

Cook over a medium heat on the barbecue / grill for 5 minutes each side.

You can also grill / broil or fry the burgers.

Just look at that cheese oozing out!

How to store the burgers

You can make the stuffed burgers in advance and keep them in the fridge until the next day.

If the minced beef has not been frozen previously, the burgers can be frozen for up to 3 months. Use waxed paper or baking parchment to keep them from sticking together.

What to serve with the stuffed burgers 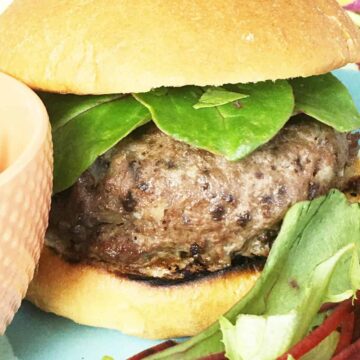 To make it easier to form the burgers dust your hands with flour.

Keyword black pudding, burgers, Stilton
Tried this recipe?Let us know how it was!

More Recipes with Beef or Lamb