If you love lobster thermidor you will love this version made with poor man's lobster at a fraction of the cost!

The 'lobster' is piled into dishes and smothered with a delicious white wine, cream and shallot thermidor sauce. Then it's topped with Parmesan and baked under the grill until golden and bubbling.

Perfect for Christmas eve as a starter or main course, fish Friday and entertaining too!

And the best bit? It's ready in 20 minutes and uses just one pan.

What is poor man's lobster?

This is a term that is often given to monkfish, although sometimes it can refer to any firm white fish.

Although it is a fish with a central backbone and not a shellfish like lobster, it doesn't have any fiddly bones. The flesh is quite meaty and doesn't flake, so it's easy to cook too.

What does thermidor mean?


The term refers to French word relating to heat and also the 11th month of the year in the French revolutionary calendar. However, some sources believe that the dish is named in honour of a play called Thermidor or that it was named by Napolean.

The dish itself is comprised of cooked lobster which is chopped and returned to its shell, covered in a creamy sauce and grilled with cheese.

What other ways can you serve monkfish?

This fish is delicious stuffed with lemon, wrapped in bacon and baked in the oven or quickly fried with chorizo and rosemary It's also perfect for kebabs, as the meat doesn't fall off, fish pies and curries.

Monkfish is found all around the British Isles all year long and varieties are also found all over the world with different names, such as:

Although lobster is delicious there isn't very much meat on it so I prefer this fish to lobster. One monkfish tail will feed 4 people too, with much less preparation. Here's why I think that you will love this dish:

Start by preparing the monkfish. It's simple to do it yourself.

Remove any skin and membranes then slice off any fins.

Place the fish on a board and use a sharp knife to cut down either side of the backbone.

Chop the fish into bite sized chunks to mimic the chopped cooked lobster that is covered in the thermidor sauce.

Heat some butter in a frying pan and add the fish pieces. Cook over a medium heat for about 3 minutes until the fish is just opaque.

Divide the fish between four dishes while you make the sauce.

Heat the remaining butter and add the chopped shallots.

Cook over a medium heat, stirring occasionally for 5 minutes until they are softened.

Pour in the stock, wine and cream then bring to a simmer.

Let the sauce gently bubble and reduce by half.

Stir in the mustard, half of the cheese and parsley.

Check the seasoning and add pepper and salt to taste.

Divide the thermidor sauce between the dishes and sprinkle over the remaining cheese.

Preheat the grill to medium and grill for about 4 minutes until the top is golden and crusty.

I served this with peas and thrice cooked chips but you could try:

This is not the sort of dish where there will be leftovers! If you do have any leftover, cover and store in the fridge for 2 days.

This dish is not suitable for freezing. 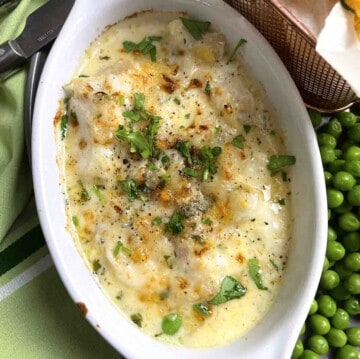 Please refer to the post for detailed recipe instructions.

Keyword lobster, monkfish, poor man's lobster, thermidor
Tried this recipe?Let us know how it was!