Celeriac purée, creamed celeriac or just plain celeriac mash, is a classic French side dish, that goes so well with lots of starters and main courses, including fish, roast meats and hearty casseroles.

Light and delicious, this recipe feeds a crowd, is easy to make in advance and freezes beautifully too. This makes it perfect for entertaining and large family gatherings.

If you've never had it before, then you definitely need to try it, especially if you are a fan of mashed potatoes!

Do you eat celeriac? I have to admit that, until I lived in France, I had never eaten it and had never really wanted to! In all fairness, I've only seen it in the UK supermarkets in the last 10 years.

It's called céleri-rave in French, celeriac in English, and is often known as knob celery, turnip rooted celery or celery root too.

It's a root vegetable like carrots and swede, but it does have a tangle of extra, smaller roots, rather than one long one. We always refer to it as the brain!

In France, its readily available fresh, or very conveniently in frozen purée form, which you can just warm through in a saucepan without defrosting, but it is really easy to cook.

Despite it's strange and rather alien appearance, it's quite easy to prepare. And, while I normally struggle with cutting up a whole swede, a whole celeriac is much lighter to work with and chop. It's definitely worth the effort!

And, it is also delicious raw, in the French equivalent of coleslaw, in carrot and celeriac remoulade.

Start by preparing the celeriac. Rather than use a vegetble or potato peeler, I like to use a large sharp knife.

I have found that the easiest way to tackle celeriac is to treat it like you would a whole pineapple.

Cut about 1cm or so from the knobbly base, until the roots are removed, the cut a slice off the sprouting end.

The celerial will now sit safely on the chopping board. Now cut the remaining peel by cutting from top to bottom in sections, making sure that any black pieces are removed.

Cut slices about 2cm or an inch, then cut these into chunks.

Put the chunks into a large saucepan and cover with the milk.

Bring the milk to a simmer over a medium heat and cook the celeriac for 20 to 30 minutes until it's tender.

There's no need to drain, so either mash the celeriac directly in the pan or transfer to a food processor or blender to mash until very smooth.

Return the celeriac purée to the saucepan.

Turn on a medium heat and add the butter to the pan, stirring while it melts.

Add the seasoning to taste and the grated nutmeg.

Garnish with a little extra melted butter, chopped parsley and an extra grating of nutmeg before serving.

The flavours of celeriac go particularly well with fish dishes or casseroles and meats in rich sauces. Try:


Celeriac has a mild flavour that is lighter than celery and about the same strength as parsnip. It also tastes slightly nutty.

Even without the addition of butter or cream it has a naturally creamy taste.


Compared to potatoes, celeriac has half the calories and carbohydrates than potatoes and zero fat. It also has 3 times the amount of fibre, making it a healthier alternative to potatoes. 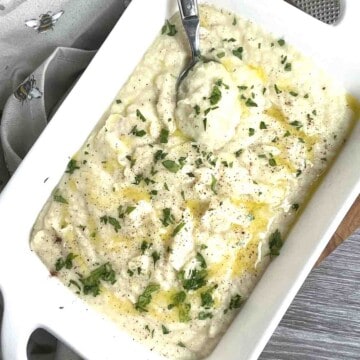 Keyword celeriac mash, celeriac puree, creamed celeriac
Tried this recipe?Let us know how it was!