Everyone has had eggy bread but you probably know it as one of it's myriad names! From pain perdu, French toast, gypsy toast, poor knight and a thousand others, it's no wonder it's so popular!

This classic dish can be varied in so many ways and eaten at different times of the day, so it's perfect for last minute frugal meals or jazzed up for entertaining.

This recipe is more of a brioche pain perdu, but I've got you covered with plenty of variations, including sweet, savoury and some in between to choose from.

All about this dish

If you’re English you probably know it as gypsy toast or eggy bread and, if you are in the US, it's French toast and it's normally eaten for breakfast.

However, this dish is popularly known as pain perdu in France and is traditionally served as  a dessert.  It is still a popular dessert locally in Deux Sevres, where I lived and one of my husband’s favourites. Pain perdu is translated as ‘lost bread’  and it was normally made to use up stale bread,  in much the same way as bread and butter pudding.

For this recipe I am giving the ingredients a French slant. It makes the most simple, frugal and deliciously quick dessert using French brioche bread, which makes it perfect for easy entertaining!

This is such a simple recipe, so these are very basic ingredients:

This dessert is really easy to prepare so, if you are having a dinner party you could easily make the brioche French toast after the main course, in less than 15 minutes.

Whisk the eggs together with the milk, sugar, cinnamon and vanilla extract.

Heat the butter in a frying pan over a medium heat then dip the bread in the egg mixture, making sure that both sides are moistened.

Fry in the pan for 2-3 minutes until golden, then carefully flip over for another few minutes.

Serve on its own or add some fruit and ice cream.

Leave out the sugar, vanilla and cinnamon and try:

Can I make these in advance?

These are best eaten freshly cooked. If you dunk the bread in the mixture too far in advance it will start to fall apart.

If you do have any leftover they can be refrigerated for a couple of days or wrapped and frozen.

Reheat in the frying pan with butter. 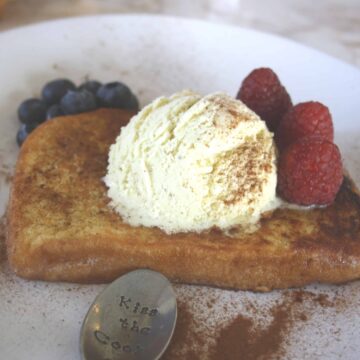