This Brioche bread and butter pudding is seriosuly delicious from the sweet buttery bread to the rich vanilla custard.

This British dessert with a French twist is also so simple to make, which is great because, trust me, you will be making it regularly!

Why you will love this dessert

Normally this pudding was made to use up stale bread and uses dried fruit sprinkled over the custard. May people aren't keen on dried fruit so making the pudding this way everyone will love it!gache bread

For this dessert most of the ingredients will already be to hand.

I've used plain chocolate from a bar but chocolate chips are just as good if you have them instead.

There's great crunch from hazelnuts and an added richness from caramel sauce.

For the bread I've used slices of brioche, buttered. If you can't find it in bread form you can often buy it as mini loaves which you can just slice in half.

The bread is baked in a custard made with eggs, sugar, vanilla and milk

How to make Brioche bread and butter pudding

I've used slice brioche bread, buttered and then sliced in half on the diagonal.

Arrange the buttered slices in an ovenproof dish that has been greased.

Traditionally this dish would have raisins in it but I find they can catch and burn in the oven, so I have switched them with chopped hazelnuts.

You could just used ready chopped nuts but I like the proper crunch of bigger pieces.

Sprinkle the nuys around the bread in the dish

Break a bar of plain chocolate (70% solids) into small pieces and  and spread over and between the bread.

Make a simple custard mix with the milk, eggs, sugar and vanilla  and pour over the bread.

For extra naughtiness I added a few squeezes of caramel sauce.

Sprinkle with brown sugar and cinnamon and bake at 180C/350F for 45-55 minutes until puffed and golden brown.

What is brioche bread?


Brioche is a French bread that is made with a rich dough with eggs and a higher level of butter added. It's often served at breakfast in France and I have also seen it served with drinks at a wedding.

It's sweet and buttery and really doesn't need butter added to it as it's more like a cake.

Can I make this recipe in advance?


Absolutely. The pudding will benefit from the custart soaking the egg mixture so this is a great dish to prepare and put in the fridge until later.

What other ingredients can I use?


You could use slices of panettone, croissants, or any bread you have.

If you like you could completely omit the butter or spread the bread with Nutella spread instead.

There are lots of other options too. Try fresh raspberries, slices of banana, macadamia, brazil or pecan nuts for a change.

With this version each mouthful will be full of crunchy nuts, melted chocolate, caramel, buttery bread and rich custard.

It's a bit like a pain au chocolate, English style or bread and butter pudding French style! What do you think? 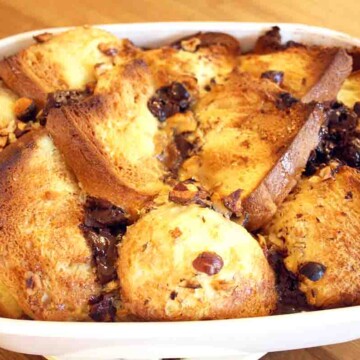 Keyword bread and butter, brioche
Tried this recipe?Let us know how it was!