Do you know how to prepare oysters? For me, there's nothing better than a freshly shucked oyster, nestled in its seawater cocoon. So light and refreshing!

This really is the simplest starter, as it is all about the oyster itself, so there is no complicated recipe here, just pure pleasure.

If you haven't tried oysters before then you are really missing out on something quite unlike most other foods. If you asked me to describe the flavour the words that come to mind are: clean, fresh, slightly salty, delicate and light. For me they are simply delicious!

In France they are still hugely popular and all the large supermarkets in France stock them all the time. The French people love them, especially as a traditional starter at Christmas. There are huge queues and often they set up a special stall in the car-park or in another part of the shop. It's a great atmosphere and the shoppers are handed out aperitifs!

There is a huge variety of oysters, both in the UK and France. Each has their own unique taste, shape and size.

The most prized in Charente Maritime are the Marennes-Oléron oysters, which undergo a particular process for maturity.

Now that I am back in the UK, we have oysters delivered for special occasions, and of course, they arrive live, ready to be shucked and eaten.

I allow 6 per person for a starter.

Safety is important when opening oysters, so that you don't cut yourself.

You will need a tea towel, to get a good hold on the oyster and a shucking knife.

If you are serious about oysters at home, you can also get a silicone oyster gripper, which holds it securely.

The knives are cheap to buy. I have one that is just a double sided blade, which is the cheapest and most popular, and another that has a lever. This lever can be used to nip off a piece of shell if you are having difficulty inserting the knife.

A small paring knife is a good substitute.

Start by checking your oysters to make sure that none are cracked or open in any way, as they could be bad to eat.

Rinse the oysters under the cold tab and brush off any loose bits.

Hold your oyster, with a cloth, with the flattest bit uppermost as you don't want to spill any of the juices when you open it.

Now look for the hinge, which is normally the pointiest part of the oyster, and insert the knife.

When the knife is in far enough and secure, twist the knife to release the seal of the muscle. The noise you hear is called the 'shucking' noise.

Ideally the oysters should be served straightaway, but it will take a time to open all the oysters so use the top shell as a lid to keep them fresh, while you prepare the rest.

Look at these beauties, brimming with flavour!

The French often serve the oysters on specially grooved plates so that the oysters sit sill on the plate. I love to serve a big platter, where everyone can help themselves. This is much less daunting for anyone who has not tried oysters before.

Start with a layer of crushed ice on a large platter. I tend to put the ice in a tea towel and bash it with a meat tenderiser. Now arrange the oysters and scatter lemon wedges across so everyone can help themselves. Take off the top oyster shells to serve.

In restaurants you are often given a little 3 pronged fork to loosen the oyster, before tipping it into your mouth. Believe me, it is considered very bad etiquette if you don't use the fork to scrape away every single piece of flesh!

At home though, I prefer to use a grapefruit spoon. Its pointed, serrated edge makes it a much better tool.Athough I am usually given a little fork to loosen the oyster in restaurants I have to say that a grapefruit spoon is much more effective. They are often served with Tabasco and finely chopped shallots in red wine vinegar. A little bit of crusty bread and butter always goes down well too...

What do you serve with oysters?

How do you store oysters?

Store them in the fridge, with the flattest side uppermost. Cover them with a clean tea towel that has been under cold water and wrung out. Technically, they can live for 4-5 days, if the temperature of your fridge is between 0-5 C. If I am having an oyster delivery, I would eat them the same day or the following day.

What wine do you serve with oysters?

I love crisp dry white wine so for a French wine I would choose a Muscadet sur Lie, Sancerre, Chablis or a Sauvignon Blanc.

If you want to see some shucking in action have a look at this video I took of my poor husband.....

It is definitely the effort! 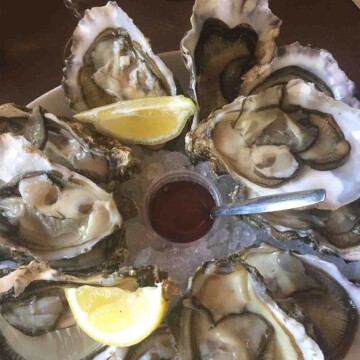 How to Prepare Oysters From Scratch

Please refer to the post for detailed recipe instructions.

Keyword oysters
Tried this recipe?Let us know how it was!
« Seafood Lasagne Using Frozen Fish
Steak and Kidney Pie with Shortcrust Pastry »