Do you love hollandaise sauce but are scared of making it?

This version can be made by the traditional method, with easy step by step instructions. However, it can also be whipped up in a few minutes in the blender, for stress free preparation.

Either way, this sauce is so delicious as it is, or used as a base for another sauce.

It's absolutely perfect drizzled over fresh asparagus for a simple dish!

Read on for plenty of serving ideas, variation, hints and tips.

You have probably come across hollandaise sauce deliciously dolloped over poached eggs, ham and muffins in the form of Eggs Benedict. This sauce has always had a reputation as being a tricky  sauce to master, but there is really nothing complicated about it. And, once you have mastered the technique, there are endless variations and plenty of hollandaise sauce uses.

According to the Michelin Guide Antonin Careme described the four French mother sauces, or sauce basis. The sauces are Béchamel, Velouté, Allemande and Espagnole.

By the 20th Century, Chef Escoffier had demoted Allemande as a daughter sauce of Velouté and instead added in Hollandaise and Sauce Tomat. All of these mother sauces are thickened with a roux, a mixture of flour and fat (usually butter), except for Hollandaise. It is actually the quickest sauce to make, and is an emulsion using the simplest of ingredients that you will likely always have available at home.

There are two ways to make Hollandaise sauce according to your preference.

However, I actually prefer the traditional method as there is less clearing up and I think that is a big factor when you are making something at home!

For the traditional method you will need to set up a bain marie, also known as a double boiler.

Fill a medium saucepan with an inch or 2 centimeters of water.

You will need a heatproof bowl that can sit snugly in the saucepan so that it doesn't actually touch the water.

In this way the contents of the bowl are warmed but don't get a direct heat. This will help to make the egg yolks increase in volume when they are whisked over warm air.

Whisk the egg yolks in a heatproof bowl with the white wine vinegar then set the bowl over a saucepan of just simmering water. Make sure that the water does not touch the bowl.

Now, whisk the mixture over the heat for 2-3 minutes until pale and thick. The mixture will have increased in volume.

Melt the butter in a pan and gradually whisk in to the egg mixture. If the mixture is too thick add a little lemon juice until you find the right consistency. Season to taste.

💭 Top tips for how to separate eggs

Put the egg yolks and vinegar into a blender and combine on a medium speed.

Melt the butter, then add in a steady stream with the blender on. It's easiest to use a jug for this.

Add lemon juice and seasoning as before.

There are lots of French sauces and here are some uses for hollandaise.

If you are not keen on the taste of vinegar you can substitute lemon juice instead in equal amounts.  Beware of adding extra lemon juice at the end.

How do you thicken hollandaise sauce?

Sometimes, the consistency of the sauce is too runny.

To correct this whisk an egg yolk and whisk slowly into the sauce over the bain marie. The combination of heat and egg will thicken the sauce.

What can I do if the hollandaise sauce splits?

Because a Hollandaise sauce is an emulsion of butter and egg there is a chance that the mixture can split. To avoid this serve the sauce warm immediately or keep warm in the bowl over the simmering water as in the traditional method. It is also possible to rescue a split sauce by whisking in a few drops of hot water.

How do you keep hollandaise warm?

Keep the sauce in the bain marie over a low heat, stirring occasionally. 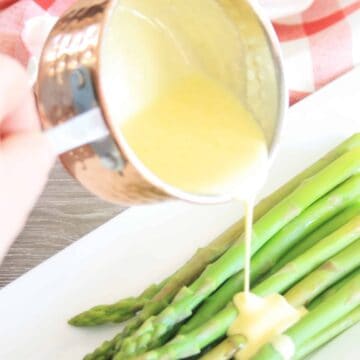 Keyword Hollandaise
Tried this recipe?Let us know how it was!