If you like the idea of a French cheese board at your next gathering, this post will tell you all you need to know about choosing a selection of cheeses and what to serve with them.

There is a definite etiquette for serving French cheese at a dinner party, from when to serve and how to cut the cheese, which is very important so you won't offend anyone too.

If you have ever been to a restaurant in France or invited to someone's home for dinner, the cheese course is a little different.

For a start, a French cheese board is served after the main course and before dessert.

Often, in a restaurant you will be offered different cheeses and would select three or four to try. These are often eaten with a knife and fork.

For a French dinner party, it's a more casual affair, where you take turns to help yourself. But, don't be fooled, you can easily offend others at the table if you serve yourself incorrectly and cut the cheese wrong.

Of course, in your own home you can serve it as you like!

❤️ Why you will love this dish

💙 Save this recipe for later

Did you know? When you see the 💙 on the right hand side you can bookmark this page, to save it for later or share it too.

Depending on where you live in the world, different French cheeses will be available.

My local French supermarket in France had a general cheese section and then a huge separate deli, full of regional cheeses. Goat cheese was also very popular and there were several cheese farms in the village which supplied local shops and supermarkets too.

However, the average supermarket can usually provide a selection of different French cheeses, and you really only need to provide three.

I would suggest a goat cheese, (also known as chèvre), a soft cheese and a blue cheese to start with.

The printable recipe card with full ingredient quantities and instructions can be found at the bottom of the article.

Start by unwrapping the cheese and place on a serving board.

Different cheeses are cut in different ways, but the rules are simple: every piece cut should take a proportion of rind to be fair to everyone else.

So, for a circular cheese like Camembert or a pavé, it is cut in segments, as if you are cutting a slice of cake into even portions.

Although it's tempting to aim straight for the pointy end of the Brie, it is more polite to start at the rinded end and cut off an even piece.

A log of goat's cheese can be simply sliced and cut in half if required.

Arrange the nuts and fruit in piles on the board or in little pots.

Place a big bowl of grapes nearby and plenty of sliced bread.

Put quince paste or some chilli jam in a little pot with a spoon.

Dig in and enjoy your French cheese board.

Remember not to overdo it though, as dessert is served next!

Try some of these dessert dishes. 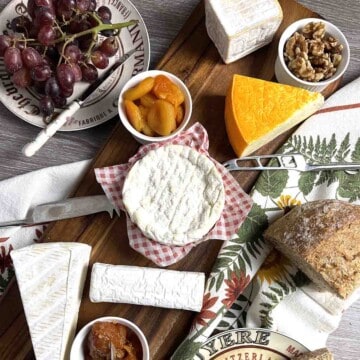 Keyword French cheese board
Tried this recipe?Let us know how it was!

Do you have a question or did you make the recipe? Please leave a rating as it helps other readers to discover this dish. Your name and email are required to avoid spam comments; they are never used for any purpose or shared with third parties.

However, due to spam comments, I do have to moderate each one, so don't worry if you cannot see your comment immediately. I'll publish your comments as soon as I can.