Thick and creamy, this celery and leek soup is a perfect comfort food for chilly days.

The addition of potatoes and rice thicken the soup and keep it naturally gluten free.

This soup is really easy to make too. Just chop the vegetables and get cooking.

And the best bit? The soup will be ready in 30 minutes.

Leek and potato soup or vichyssoise, is probably the most famous French soup but there are so many other variations and they are all easy to make.

This leek and celery soup is also known as potage Celestine. It's thickened with rice and potato, which release their starches into the soup as it cooks.

The delicate flavour of the leeks go so well with the celery too. The flavour is milder when the celery is cooked. This also means that you can use old celery, that may be stringy, as the soup will be pureed smooth.

Like vichyssoise, this soup can be eaten hot or cold, which makes it perfect for making in advance for entertaining.

Wash the leeks and trim the ends. Cut in half lengthways then slice into 1 cm chunks.

Trim the celery and cut into 1 cm slices.

Keep the celery leaves for garnish.

Peel and dice the potatoes into 1 cm pieces.

Heat the butter and oil over a medium heat and add the leeks and celery.

Cook, stirring occasionally, for 10 minutes until the vegetables are soft.

Bring the mixture to a boil and put the lid on the pot.

Simmer for 20 minutes until the rice is cooked and the potatoes are tender.

Use a stick or immersion blender to blend the soup until it is smooth and creamy.

Stir in the milk and reheat if serving immediately or leave to cool and reheat when you are ready.

Garnish the soup with a drizzle of cream, the chopped celery fronds, a grind of black pepper and some croutons.

Let the soup cool to room temperature then cover and store in the fridge for up to 5 days.

Freeze the soup in containers for up to 3 months.

Defrost then reheat gently in a saucepan.

What part of the leek do you use in soups?

The whiter and light green parts of the leek are best for eating. The dark green parts tend to be tougher. Give them a good wash and use them to make stock instead.

Why is this soup called Celestine?


Celestine is a first name meaning heavenly in English.

The name appears regularly in French recipes such as Consommé Celestine, which has a Celestine garnish of finely shredded pancakes and Poulet Celestine, which was created in honour of a lady of the same name.

If you know the origins of this term please let me know! 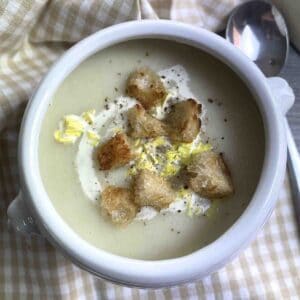 Disclaimer: The nutritional information provided is approximate and is calculated using online tools. Information can vary depending on various factors, but we have endeavoured to be as accurate as possible.
Keyword celery and leek soup, poatage Celestine
Tried this recipe?Let us know how it was!