Well today is Halloween and it's a gorgeous sunny day here in France with temperatures in the twenties! All the shops have been full of a huge range of pumpkins as opposed to the UK and they eat them rather than just carving them up.

Earlier in the year I  bought a packet of seeds for 'potiron' in Lidl, not really expecting any success. Back in the the spring I dutifully plonked my seeds in pots in the greenhouse. They sprouted quickly and it wasn't long until they were gasping to be planted into the new veggie patch.

It sounds a bit strange, but every day they seemed to be growing...

I was a bit concerned that they were green when my neighbours were orange. He joked that I must be growing watermelons or 'pastèque'. I thought he was saying plastic...

And eventually I got these!

So, for 49 cents I have a rather large selection of pumpkins that will apparently last six months. They are sitting in the farmhouse at the moment as there are still mice around, despite the cats doing their best.  The only problem is that we are pumpkin virgins. I have to confess that I fed my first-born mashed pumpkin in the hope that he would eat anything; he grew up to be the fussiest vegetable eater known. I couldn't even contemplate it myself at the time.

Now the frugal me has been scouring blogs and have been inspired by a post by Fae's Twist and Tango, Pumpkin Muffins and also by Cookie and Kate, Healthy Pumpkin Recipes. I wanted to make my own variations based on a basic sponge mix and I made pumpkin soup with coconut in the week and thought the combination was tasty.

The first thing to do is to make the pumpkin purée. Halve a pumpkin from  the stalk downwards and scrape out the seeds. I found that a grapefruit spoon was best to get rid of the stringy bits. Place each half, cut side down, on a baking tray and roast until soft  at Gas 5 or 180 C. Mine took about an hour but will obviously depend on the size. When it's cooked the skin just peels off and you can easily mash it by hand or stick it in the processor.

Make a basic sponge mix and add some pumpkin puree. Then add some desiccated coconut and some chopped walnuts. Divide the mixture between 6 muffin cases with an ice-cream scoop. Add a walnut to each one and sprinkle over some extra coconut.

What you get with these pumpkin muffins is a very moist  texture with a gorgeous colour. Fussy eaters will never know there was any pumpkin in it!

As these were so good, and I had loads of pumpkin  leftover, I made more without nuts and instead added cinnamon and nutmeg as I can't get pumpkin pie spice here.

These are great on their own but I added a spiced buttercream and sprinkled on some orange zest.

So I've forayed into 'pumpkin land' with muffins and soup so far. I've been really impressed with the fantastic colour and I now have a freezer full of pumpkin purée.

Apart from pie, curry and stews what else can I do with it?

And if you are wondering why there are 5 in the picture.....Grayson devoured one, paper included, when I turned my back. They must be good! 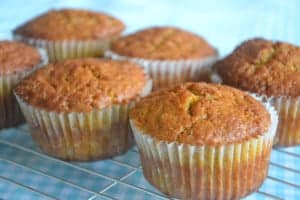 To make pumpkin purée cut a pumpkin in half from the stalk and scrape out the seeds.
Place cut side down on a baking tray and roast until soft at 180 C or Gas 5.
Take off the skin and mash or process the pumpkin.
Any unused purée can be frozen.
Tried this recipe?Let us know how it was!
Previous Post: « Christmas Apple Chutney
Next Post: Oysters and How to Prepare (with Video!) »