Who can resist loaded potato skins? My boys always enjoyed a trip to an American restaurant when they were young and I have been recreating items off the menu ever since as it was much cheaper than going out! Of course, in rural France there are no similar restaurants so it has to be a home recipe. Now every time  my boys are  together they request these and they can be ready in about 30 minutes.

Start with 8 medium potatoes roughly the same oval shape and cook them in the microwave. I just prick all over with a fork and put them on a plate. Cook on full power for 7 minutes, turn them over then another 7 minutes. They may need longer depending on size. Once they are tender leave them for a couple of minutes to cool. Whilst they are cooking fry some lardons or chopped bacon and grate some cheese. Red Leicester or cheddar works best but I tend to have to use Emmental in France.

I use a serrated vegetable knife to slice in half and then use a grapefruit spoon to scrape the middle of the potato, leaving an even layer. Preheat the oven to 180 degrees and put a shallow tin in to heat up. Meanwhile distribute the cheese and bacon amongst the shells. Chopped fried onion or mushrooms work well too.

Lightly oil the oven tray and add the loaded potato skins and bake for 15-20 minutes until golden.

Make a quick dip by combining some creme fraiche and some chopped chives and enjoy as a snack, starter or with a main meal.

Any other ideas out there for loaded potato skins?

Make these vegetarian by using fried onion or mushrooms instead.
Sprinkle with dried basil or other herbs before baking.
Keyword potato skins
Tried this recipe?Let us know how it was!
Previous Post: « Lemon Chicken en Brochettes
Next Post: Raspberry and White Chocolate Mini Loaves » 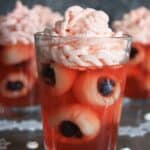 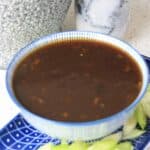 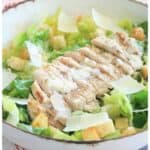